Here are the latest headlines from our last governors meeting.

DIGITAL MAKEOVER. Our website is becoming more and more important as a way for people to find out what goes on in school. So we’ve started redesigning it — here’s a sneak preview of the homepage with a scrolling photo banner, which will have lots of cool new features — watch out for the launch in January 2014!… 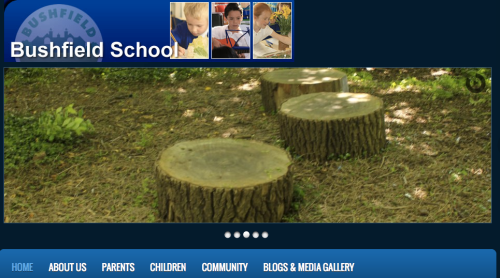 NEW GOVERNOR. Governors are made up of parents with children in Bushfield, teachers and other people who live in Wolverton, who all give their time and talents for free, to make the school as great as possible. Watch out for the Headteacher’s newsletter when we’ll announce another vacancy for a parent, but meantime, a new Parent Governor has just joined us — Arnoud Franken — so watch out for his face around the school! Around says…

My favourite questions have always been ‘why?’ and ‘what would happen if?’. I feel fortunate that I have always had the opportunity to pursue the answers to these questions, both in my education and professional career as a Senior Researcher at Cranfield School of Management, in order to improve people’s lives. It is also this passion for learning and making a difference that motivated me to become a community governor at Bushfield, and to support the School in its mission to inspire pupils to fulfil their potential and ambitions. My family and I have lived in Wolverton since 2004. Our son is now at Bushfield, and his sister is looking forward to joining him there in the near future from Wyvern School.

PARENTS AND COMMUNITY: WHAT DO YOU REALLY CARE ABOUT? Finally, we know the best schools make really good use of their parents and local communities to add exciting new events in school. A really good example has been the Authentic Inquiry projects (AIP), when Years 5 and 6 spend two whole weeks doing a project that interests them. We get lots of parents and businesses in Milton Keynes involved in those! But we want to have their involvement all year round so if you are a parent or member of the community who is really passionate about a topic (nature? science? fashion? art? drama? geology? woodwork? technology? cooking? — you name it), enjoy working with children, and want to pass your enthusiasm on to the pupils, then get in touch with the school office, and we’ll try to figure out how to make it happen! It might be anything from being a guest in Assembly, to helping out during an Authentic Inquiry, to helping run an After School Club. Let’s talk about it…

Here’s an update from Bushfield’s governors on some of the things we were discussing at our last meeting in July. (Every meeting we’ll pick a few things, so you know what we’re up to!)

Miss Curtis has her last planning meeting with us

July was of course when the whole school said goodbye to Miss Curtis as Headteacher. Since school governors work closely with the Headteacher, and see how hard she works, we really wanted to say a big Thank You to her, just like all the pupils, teachers and parents did in so many brilliant ways. So at the end we gave her a surprise special present, with some very strange objects…

…and hoped that she wouldn’t miss us all too much in her new school, where she will meet a whole new team of governors!

As you probably know, every May, Year 6 does special reading, writing and maths tests called SATs, so in July we heard from Miss Curtis some early clues about how they had gone. The answer is really well overall. We don’t have the final results yet, but it looks like Bushfield pupils do better on average than other pupils in the country, so really well done everyone, teachers and pupils!

All Bushfield pupils learn about their ‘learning muscles‘ right from Year 3. This helps them remember that they can get better at learning anywhere, anytime! We’ve been testing some more exciting learning tools developed by scientists at Bristol University. Our Year 5 and 6 have tested ELLI (which stands for the Effective Lifelong Learning Inventory) which is a web-questionnaire for staff and pupils to assess their ‘Learning Power’. ELLI creates a visual spidergram, showing how a pupil sees him/herself, which they discuss with their teacher, and try to improve. Here’s an example:

ELLI is part of a whole new way of learning called Authentic Inquiry, where pupils are given much more choice about what topic to learn about. The teachers can’t be expert in every subject of course, but they help the pupils investigate it. At Bushfield we have branded this AIP (Authentic Inquiry Projects). At the end of each day, pupils write a diary entry reflecting on how their investigation has gone, in a kind of ‘learning journal’, which is actually a blogging tool called EnquiryBlogger, built at the Open University. A blog is a social media tool, which means that teachers and pupils can read each other’s blog stories, and comment on them. EnquiryBlogger shows the seven ELLI animals who help pupils remember the different ways of becoming better learners, so pupils can think about which aspects of their learning power they feel they’ve been working on.

While Yr6 started this in 2012, this year was the first time Yr5 have tried it, and they chose which aspect of a Fashion Show they wanted to help create. This was staged in the summer term and the whole process was hugely creative – see some of the blog posts from July!

So, the governors were hearing about how this experiment had gone, and will be doing their own investigation into its impact and how to do it even better next time. Thanks to all the staff and many parents who helped with AIP 🙂